The SII engineering group has released its first-half revenue data for fiscal 2019-2020.

Management Board chairman Eric MATTEUCCI commented that: « The SII group has experienced growth again this quarter, after a very dynamic first quarter. Over the half year, this growth has been led by all the business lines and by the teams’ commitment. This performance is in line with our target for turnover, which is expected to be between €675 and €700M for the financial year, and our target of profitability.»

In France, the SII Group posted half-year revenue of €169.2m, up 7.1 percent from the first six months of the previous year. The growth dynamic over these six months of the financial year was led by all the Group’s sectors, with a strong contribution from the main markets: Aeronautics-Spatial-Defence, Banking-Insurance, Telecoms-Media.

The SII Group’s international operations contributed €156.7m to the revenue for this half year, with double digit growth, of 13.8 percent (14.2 percent organic growth). The international operations accounted for 48.1 percent of the SII group’s revenue. The good performance reflected improvements in Poland (where sales were up 23 percent), which contributes most to international revenue, Canada (+34 percent), Chile (+77 percent), Colombia (+22 percent), Morocco (+63 percent), the Netherlands (+34 percent) and Romania (+17 percent). Business was stable in Spain, while it declined by 11 percent in Germany, 14 percent in Belgium and 9 percent in the Czech Republic.

Based on the first half’s results, the SII Group confirms its revenue objective of between €675 to 700M for the full 2019-2020 fiscal year (revenue up 7 to 11 percent), accompanied by an operational result with the same rate of increase. 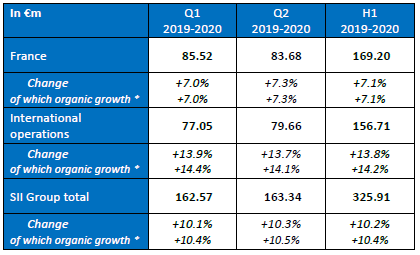