SII Group, a specialist in engineering, announces its 2019-2020 half-yearly results, approved by the Management Board on December 10, 2019 and currently under audit.

Eric Matteucci, Chairman of the Management Board, commented: « Once again, SII Group performed well in the first half of 2019-2020. The sector's trends combined with the implementation of our new organisation helped turnover grow by 10.2%. Operating profit also showed a solid increase of 14.6% compared to the first half of 2018-2019. These trends confirm the objectives announced for the financial year: turnover of between €675m and €700m, with a similar increase in operating profit. Furthermore, I am delighted to welcome François Goalabré, Antoine Leclercq, and Charles Mauclair to the Management Board. I wish them great success. Finally, I would like to take this opportunity to thank Jean-Paul Chevée and Patrice Demay, who have worked enthusiastically with me to develop SII Group. » 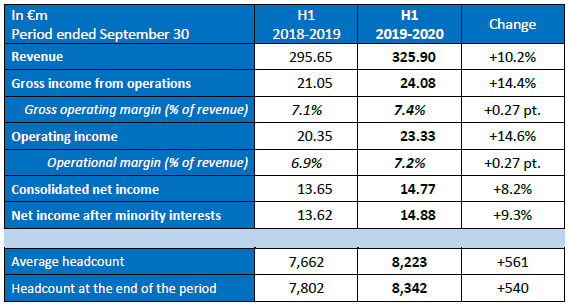 First half of fiscal 2019-2020: a balanced France/international share and sectoral breakdown

International operations generated nearly half of revenue, reaching €156.71m for the first half of the year, a growth of 13.8% over the same period last year. Poland contributes more than 58% of international revenue, thanks in particular to the good results of the Banking, Insurance, Mutual Insurance, Health, and Electronics sectors. Its revenue rose by 23.5%. Business in Spain stabilised in a what is still a complex geopolitical environment, while Germany was down due to SII Technologies, while SII Deutschland's business continued to grow.

Over the past six months, many references have been won in all sectors. The three key sectors of Aerospace-Space-Defence, Banking-Insurance-Mutual Insurance and Telecoms represent 22.9%, 19.7%, and 13.1% of the half-year's business respectively. Diversification sectors (Services, Industries, Automotive, Transport, Retail, and Health) continue to grow and now represent 37.8% of revenue.

Operating income benefited slightly (+€219K) from the first application of the IFRS16 standard, which had a positive impact of +0.07% on operating margin.

The increase in activity showed a net profit up 8.2% to €14.77m, after taking into account financial profit and taxes.

New composition of the Management Board

Following from the implementation of the Group's new organisation last September and given an expiring term of office, François Goalabré, Antoine Leclercq, and Charles Mauclair, members of the Executive Committee, have joined the Management Board alongside Éric Matteucci.

François Goalabré, Regional Director for France Nord & Grand Est and a member of the Executive Committee, is a graduate of Rennes Business School and holds a Master II MAE. He joined SII Group in 2005, responsible for sales and then management functions for SII Ouest. In 2013, he was appointed head of SII Rhône-Alpes and joined the Management Committee of SII France. In 2019, he took on steering the Nord & Grand Est region and became a member of the Executive Committee. With a strong entrepreneurial culture, he has solid experience in both sales management and profit centre management and development.

Antoine Leclercq, International Development Director, is an engineer from ESIEA. His professional career began with technical management and continued with the management of business units, regions, and broader territories within other digital service companies. In 2010, he joined SII Group, joining the Management Committee and heading the Southwest region, then took over the Aerospace & Defence (ASD) sector at the Group level. In 2019, he assumed responsibility for five international countries with strong links to the ASD sector, for which he is the Executive Sponsor as a member of the Executive Committee. As a service professional with a strong operational management culture, he has demonstrated his ability to grow business and bring teams together.

Charles Mauclair, Regional Director France Grand Ouest, is a graduate of the Rennes School of Business where he completed a specialised course in Management of New Technologies. He joined SII Group in 2004, responsible for sales and then business unit management functions. In 2011, he became Key Account Manager for the Group's first Telecoms client. In 2015, he was appointed head of SII Atlantique and joined the Management Committee of SII France. Since early 2019, he has been in charge of the Grand Ouest region and a member of the Executive Committee. As a technology consulting professional with strong managerial leadership, he has acquired solid skills in business and corporate strategy to ensure the company's development.

Given the business and financial performance of the first half of the year, SII confirms its objectives for 2019-2020:

Appendix to the press release: Applying the IFRS16 standard

As a reminder, all rental contracts (simple rental contracts and financing rental) must be accounted for in the same way. An asset is recognised for the right to use the rented good, and a rental debt discounted from its future rents is recognised as a liability. IFRS16 is an accounting treatment that is neutral for the company's cash position.

The main impacts of applying this standard on SII Group's half-year financial statements are as follows:

Revenue for the first half : 301,2 M€
Down 7.6% (-5.9% of which at constant rates)
Gradual improvement of the situation in the second quarter in the context of the health and economic crisis