The SII engineering consulting group has released its financial results for the 2018-2019 fiscal year. They were approved by its Management Board on June 5, 2019 and are currently being audited.

Eric Matteucci, Chairman of the Management Board, commented: “The SII Group has performed well both in France and internationally. The highlight of the 2018–2019 financial year was organic growth of more than 13% along with an improved operating margin. This success is the result of the commitment demonstrated by the teams for 40 years now. This year is an opportunity to celebrate SII’s creation and the anniversary of its listing on the stock exchange in 1999. In keeping with its history of growth, SII intends to continue its ascent. A new organization in line with its future ambitions was put in place at the beginning of the year and will be fully operational starting in September. The SII Group aims to use this structure and its solid fundamentals to achieve the same scale of organic growth in its turnover and operating profit for the coming year at between 7% and 11%”. 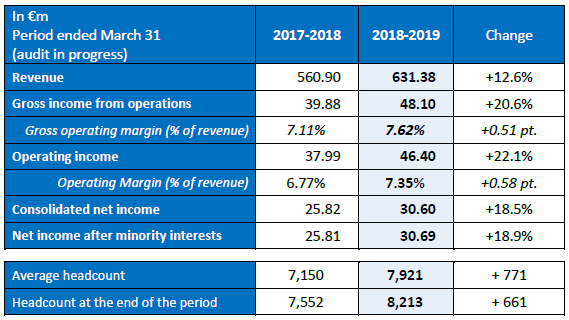 The SII Group’s growth was accompanied by a high recruitment rate over the 2018–2019 financial year. As of March 31, 2019, the SII Group had a total of 8,213 employees, compared with 7,552 at the end of the previous financial year. The share of employees in France also accelerated with a total of nearly 4,000 employees, an 8.5% increase from the previous year. Capitalizing on its 22 local sites, the SII Group has a strong regional network in France with 63.7% of its employees in France located outside the Greater Paris region. SII France’s average staff activity rate remained favourable at 91.1% over the year.

Earnings growth over the financial year

As previously stated, the SII Group’s performance indicators are increasing, driven by its continued high activity rate in France and internationally and the ongoing measures to improve its profitability:

* Cash flow before net borrowing costs and taxes.
** Net cash position impacted by IFRS9, after publication of results for n-1 on 5 June 2018.

In keeping with its dividend distribution policy, SII will propose to the annual shareholders’ meeting on September 19, 2019 that it approve a payout of €0.20 per share.

To continue and intensify the group’s development, a new organization was put in place at the beginning of the year. This organization will contribute to the development of further synergies and promote better coordination of the teams on cross-functional projects, which will be a vector for commercial efficiency and optimization of value creation for the group’s customers.

This new organization, fully operational starting in September, has resulted in the creation of a more streamlined Executive Committee consisting of members of the Management Board and representatives of overhauled or newly created operational divisions: Regions (France scope), International, and Development. This new organization provides the group’s entities with additional support and resources to continue to deliver a high level of commercial and operational performance by capitalizing on all the know-how accumulated by the group.

In view of the sector’s dynamics and the favourable forecasts for 2019 published by representatives of the digital sector, the SII Group is confident about its growth dynamics. Against this backdrop and thanks to its new organization, the SII Group aims to achieve the same scale of organic growth in its turnover and operating profit for the coming year at between 7% and 11% (turnover between €675 million and €700 million).