SII Group, a specialist in engineering business lines, is announcing its 2019/2020 annual results, which were approved by the Management Board on 09 June 2020 and are currently being audited.

Eric Matteucci, Chairman of the Management Board, commented:«Despite a year-end disrupted by the Covid-19 crisis, the SII Group achieved a financial year 2019/2020 that was up by 7.1%, superior to its benchmark market. Since the start of its deployment in September, and even more so in this context of crisis, the new managerial organisation put in place has been a real asset for the coordination of teams and the further development of synergies. As a major player in the engineering business lines, the SII Group operates in a sector that has shown its resilience and its essential role for the continuation of activities in many economic sectors. I am confident about our ability to bounce back. Thank you to our customers for their confidence and to all our employees for their responsiveness and adaptability in this complex environment.» 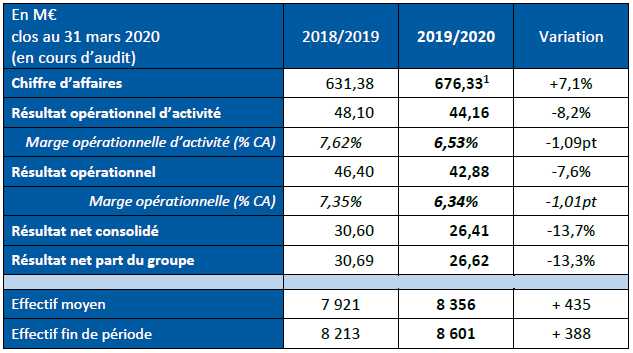 The 2019/2020 financial year ends with a balanced distribution of revenue between France and international, respectively at 51% and 49% of revenue.

Revenue in France was €347.54 million, up 1.7% from the previous year, as the end of the year was impacted by the health crisis after nine months of solid growth (+4.3% in the first nine months). Growth for the year was driven in particular by the Aeronautical-Space Defence, Banks-Mutual Insurance and Energy sectors, which together represent the most dynamic sectors in France. In France, thanks to its 22 local establishments and 4,207 employees (+6.0% compared to 2018/2019), the SII Group is located in proximity to each of its customers. It is based on a strengthened organisation, introduced last September, which combines decentralisation via the local branch and additional support and resources centralised at group level.

This new organisation also serves the network of 88 international locations and makes it possible to seize opportunities at local level while developing more synergies between the different countries. At the end of March 2020, international revenues were €328.80 million for the financial year, up +13.6% (+14.0% organic).

At the end of March 2020, the SII Group delivered operating profit on activity of €44.16 million. Operating margin on activity was 6.53%, down in this particular context. The health crisis affected the Group's average AREH², which stood at 88.4% at the end of the financial year, compared with 90.7% in 2018/2019. The situation is very different according to geographical areas: the international operating margin grew by 0.7 points, to 8.1%.

Operating profit in France was €16.1 million, representing an operating margin of 4.6% (7.3% at the end of March 2019). During the year, and despite an additional working day, the margin was impacted by the deterioration of the AREH linked to the health crisis at the end of the year but also by the structural investments made during the year to set up the new organisation, which is an additional asset in crisis management and in preparing for the end of the crisis.

Operating profit was €26.8 million internationally, up 24.8%. This performance is mainly based on strong activity in Poland, which continues to deliver sound profitable growth year after year. In addition, the IIC Group continued its work to continuously improve the profitability of its other locations. The performance of subsidiaries in Chile and the Netherlands is improving. In Spain, despite a new provision for receivables of €0.9 million, the situation is stabilising. In Germany, the historical situation combined with the health crisis led to a sharp deterioration in the operating margin. The IIC group is continuing its work to improve profitability in this area in particular.

After taking into account financial profit and taxes, net profit was €26.41 million, representing a net margin of 3.90%.

In this context of a health crisis, the SII Group will propose, at the General Meeting of Shareholders to be held on 17 September 2020, the payment of a dividend of €0.10 per share.

Outlook: with sound assets and levers for bouncing back, SII is ready for the recovery

The SII Group has many assets and levers for recovery, allowing it to resume its growth momentum at the end of this period. Historically, following various crises, the group has been able to adapt and reinvent itself. Today, the SII group has a balanced 'Build' and 'Run' mix. This offer has enabled it to respond to customers' requests concerning their critical activities during the crisis, and will enable it to support them in exiting the crisis, in particular on innovative projects to meet needs arising from the experience of the health crisis itself, for example in terms of cybersecurity, robust networks or digitalisation. Faced with the emergence of new issues, the SII Group continuously strengthens the skills of its Fungineers to best support its customers.

To date, the impact and recovery trends vary according to the nature of the projects, the sectors of activity and the geographical areas. Against this background, projections for the full year are difficult to assess. Therefore, the IIC group will give targets on a quarterly basis only.

Appendix to the press release: Application of IFRS16

As a reminder, all leases (operating leases and finance leases) must be recognised in the same way. An asset is recognised for the right to use the leased property and a discounted rental liability for future rentals is recognised as a liability. IFRS16 is a neutral accounting treatment for the company's cash flow.

The main impacts of the first-time application of this standard on the SII Group's annual financial statements are as follows:

The SII Group strengthens its position in Belgium by acquiring ANANKEI BV, based in Leuven.